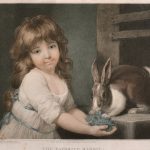 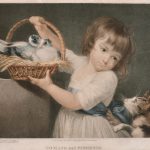 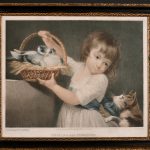 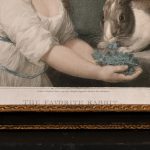 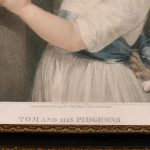 Tom and his Pidgeons / The Favourite Rabbit

Tom and his Pidgeons
The Favourite Rabbit

Pair of stipple engravings printed in colours
by C. Knight from paintings by J. Russell, RA,
Crayon Painter to his Majesty and their Royal
Highnesses the Prince of Wales and Duke of York.
London, Published June 1st, 1792 by C.Knight
Engraver Boston Row Brompton

John Russell (1745 – 1806) was the outstanding British pastellist working in this medium from the early 1770s to his death in 1806. Apprenticed from 1762 for five years to Francis Coates a leading portraitist in both pastels and oils,

Russell married Hannah Faden, the daughter of the printseller William Faden, in 1770. After a precarious start to his career, he was made an associate of the Royal Academy at the age of 27 and elected a full academician in 1788. He was to exhibit regularly at the Royal Academy from 1769 displaying there over 329 of his pastel portraits and “fancy pictures”, and by the early 1790s was recorded as earning over £1,000 per annum for his increasingly busy portrait practice. Several of his pictures featured his patrons’ children with pet animals and, the father of seven children himself, “Tom and his Pidgeons” portrays his son Tom whilst “The Favourite Rabbit” is believed to be Maria one of his daughters.