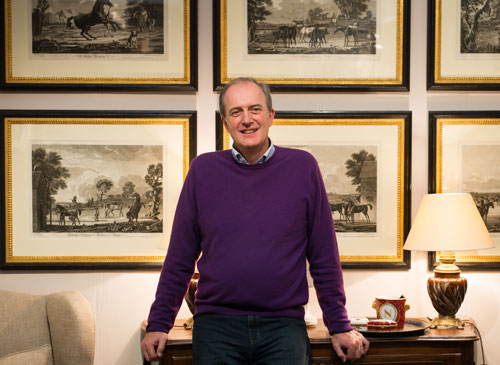 Nicholas Price is an independent dealer specialising in British and European prints and oils from the early eighteenth century through to the present day.

In 1978 he began his career by joining the Richard Green Gallery and spent eight years in the New Bond Street branch under the directorship of John Sabin, the leading expert of his day in original British prints. In 1986 he was invited to join Arthur Ackermann & Son Ltd becoming a director of the gallery that for over two hundred years has specialised in sporting art. In 1991 he left to set up on his own, and, after a period of sharing gallery space with other independent dealers, he now works from home in London where he can be reached by appointment. Meticulous about authenticity and condition, he remains one of the few dealers in Britain to continue holding stock in top quality eighteenth and early nineteenth century prints and engravings.

A member of the BADA, Nicholas has also served for several years on the Executive Committee of the British Sporting Art Trust, a charitable body established to promote awareness of our national sporting heritage. His special remit is to direct the selection of art to be displayed in the Trust’s rooms within the National Racing Museum at Newmarket. In 2005 he was asked to write the catalogue and curate the largest-ever Exhibition of the Engraved Work of George Stubbs, with works on loan from museums and private collections from both Britain and America.

As an independent agent he advises clients on the acquisition or disposal of individual paintings and prints or whole collections. This role can take the form of assisting individuals in the selection of images as well as their preservation, curation, and conservation. Over the years he has discovered or advised clients to purchase paintings by artists including Sir Alfred Munnings, John Herring, J.L. Agasse, Samuel Scott and Thomas Gainsborough with a special knowledge of British sporting art. He is always looking for the unusual and decorative works by both major and minor artists, the main essential criteria being both quality and value.

He has participated in several international art fairs and is a regular exhibitor at the British Antique Dealers’ Association Fair and at the Battersea Decorative Fair.