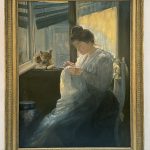 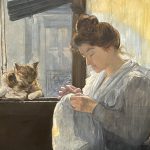 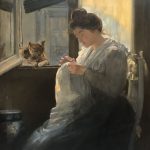 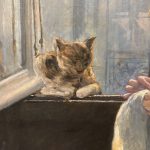 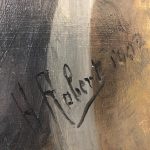 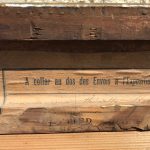 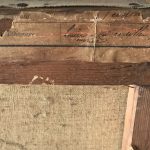 Most modern writers of late nineteenth century French art have conferred an heroic status on certain institutions – such as the Salon des Refusés, the first Impressionist exhibition, or the Salon des Indépendants, which are all seen as beacons of light in an otherwise murky and regressive artistic field. One must not forget, however, the difficulties that women artists faced in getting themselves known and recognized. Too often the labels for art movements of this time are gender specific, and not enough attention is paid to the struggles confronting young women wishing to be accepted by society as equals to the activities of their male contemporaries.

Opportunities for women within the Parisian art world in the 19th century were limited. The influential Ecole des Beaux-Arts did not begin admitting women until 1897. Prior to that year, the only state-sponsored option for women’s art education was the Ecole Nationale de Dessin pour les Jeune Filles, which received less funding than men’s schools. Additionally, women were prohibited from joining many other existing exhibition groups, schools, and public art spaces.

The Union des Femmes Peintres et Sculpteurs was founded in 1881 in Paris as a society for the promotion of female artists. The Union was the inspiration of the sculptor and educator Helene Bertaux, and had as many as 450 members at its peak. Their goals were to create a community to educate and support female artists and to display their work. They published the Journal des femmes artistes newsletter, in which members of the Union could communicate and comment. They also founded and organized the annual Salon des Femmes as an exhibition exclusively for women’s art. The Salon was intended to be a non-traditional and non-hierarchical exhibition, including decorative arts, and giving new and established artists equal access to preferred hanging spaces. The first Salon des Femmes took place in January 1882 with 30 exhibitors. For over a century the Union continued to organize and publicize the event each year, with the number of exhibitors rising to 130 in 1885 and 295 women at the 1896 Salon.

As was so often the case with female artists, there is little information known about Henriette Robert, except that which can be gleaned from her paintings themselves. A member of the Union des Femmes Peintres et Sculpteurs, she is recorded as exhibiting at the Paris Salon des Artistes Français – of which she became a member from 1909. Her dates are not known, nor if Robert was her maiden or her married name. She was, however, listed as being a pupil at the Académie Julian.

Founded in 1867 by Rodolphe Julian, the Académie was a private studio school for art students offering independent, alternative education and training in arts. The early success of the Académie was also secured by the famous and respected artists whom Rodolphe Julian employed as instructors:  Adolphe Bouguereau, Henri Royer, Jean-Paul Laurens, Gabriel Ferrier, Jules Lefebvre and other leading artists of that time trained in Academic art. What was more innovative was the inclusion of female students, both from within France and overseas. Men and women may have been trained separately, yet women participated in the same studies as men, including the drawing and painting of nude models. Human exchange went forward in an atmosphere that was collegial, easy-going and mutually supportive. It was to nurture some of the best artists of the day.

The theme of this painting by Robert relates to the work of the author Emile Zola, (the wife of whom incidentally was a seamstress before their marriage), and whose books vividly portrayed the everyday life of all sections of French society towards the end of the 19th century. Zola wrote in precise detail of his characters’ surroundings to create his stories of social realism often documenting the hard manual labour of the working poor.

Robert, however, paints with detail the concentration of the young woman’s face and the adeptness of her delicate fingers – all contrasting with the less fully finished paintwork of both her dress, the large urn at her feet, as well the sketchy detail of the neighbouring house opposite. Even the sleepy cat on the window ledge is suggested more than fully observed. The artist has used little colour in her work, mainly just blues and greys, with strong patches of yellow to depict the brightness of the sunlight outside the dingy interior. It is very much a painting of everyday reality as it existed in the School of Realism, but also strongly influenced by impressionist associations with loose brushstrokes and a pastel softness feel about it.