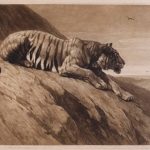 The Watcher on the Hill

Herbert Dicksee’s growing fascination with lions, tigers and leopards was to send him frequently to sketch in London Zoo of which he was later to become elected a Fellow. As referenced in the 1906 article about Dicksee in the Windsor Magazine “…he used to rise at 6 o`clock in the morning to visit the Zoological Gardens before visitors could arrive and obstruct his view. There he would be seen, morning after morning, making sketches of the lions and tigers in the reposeful intervals of their restless movements.” And again later: “Mr Dicksee is a very painstaking artist and spends at least three or four months over each plate.”