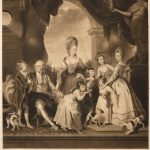 “The most monumental achievement of British portraiture, the one occasion when Reynolds was able to demonstrate the full possibilities of applying the historical grand style to portraiture”:Waterhouse.

The oil painting was exhibited at the Royal Academy in 1778, but the mezzotint, probably the largest ever engraved in England, was not published until 37 years later by Charles Turner.