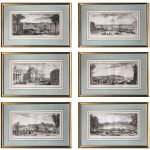 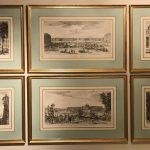 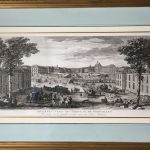 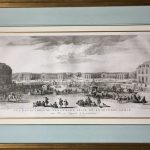 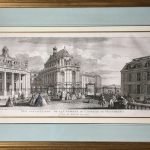 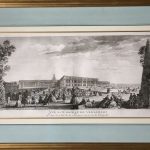 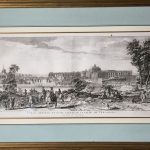 The Chateau of Versailles

Views of the Palace and Gardens of Versailles

A set of six line engravings
by Jacques Rigaud from his own designs
Printed circa 1730 and sold, avec Privilege du Roi,
by the artist, Rue St Jacques, Paris

It is fair to say that without the work of Jacques Rigaud (1680 – 1754) the image of the 18th century French royal residences and gardens would not have been so well known nor had such a dominant effect throughout Europe in the history and development of landscape design. Born in Provence, his formative years were spent as a draughtsman in Toulon and Marseilles before the advent of the plague in 1720 necessitated a move to Paris. Here he soon established his reputation as a topographical artist with his engravings of views of the monuments and well-known buildings of the capital, which during the years of the Regence under the young king was becoming the architectural centre of northern Europe. Rigaud was trained not just as a technically accomplished draughtsman skilled in the art of ink and watercolour, he was also a master engraver who saw the financial benefits of publishing his own images.

It was with his Views of the Palace and Gardens of Versailles that his fame was made for posterity, and the vision of Louis XIV to promote a new and triumphant vision of the power of the state and the grandeur of the French monarchy became known through art. Rigaud successfully brings to life the monumental vision of the Sun-King to transform a vast expanse of nature into an unforgettable garden tamed and ordered by human intelligence.

It is still unknown whether this series was a royal commission or more as a commercial venture thought up by the artist himself for public consumption. The whole project was without doubt the embodiment of the grandeur of the monarchy, and by its publication Rigaud became a pivotal figure in the development of French landscape painting.