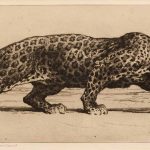 Study of a leopard

Herbert Dicksee was one of the greatest wild animal artists of his generation.  A naturally gifted draughtsman, he became an expert in the observation of the character and behaviour of his animal subjects, and in particular his images of the power and majesty of lions, tigers and other big cats of the world.  His success in gaining recognition can be seen in the comment by the art critic for the Windsor Magazine of 1906 who wrote: “His strikingly lifelike presentment of lions and snarling tigers has, of late years, become very familiar with the general public.”