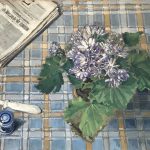 Still life of flowers, knife and newspaper on a tablecloth

Hélène Rivière was born in 1895 into an artistic family, her father being a sculpture teacher at the École des Beaux-Arts in Toulouse whilst her mother was a specialist in the craft of broderie. Helene’s presiding love in art was for animals so prevalent to the S.W. France – ducks, geese, turkeys and chickens – depicted either in detailed studies or in their farm settings.  She exhibited regularly from 1920 onwards at the Toulouse Societé  des Artistes Meridrionaux, and also in Paris at the Salon between 1926-40, winning a Gold Medal in 1935. Following the death of her father in 1922, her subject matter expanded under the guidance of her great friend and mentor Henri Martin into flower paintings and landscapes of the Tarn region and the foothills of the Pyrenees as well as the seaside towns of Collioure and Banylus.