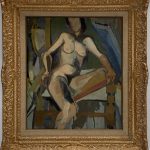 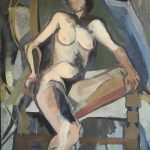 A pupil of the École des Beaux-Arts in Toulouse from 1937, André Vernette found work post World War Two as a decorative mural painter whilst at the same time beginning his career as a full time artist. From 1947 -54 he was a member of a small group of 7 artists in Toulouse collectively working under the heading of Le Chariot, and his work was also hung in the Salon at Paris. In 1949 he became a professor at the École des Beaux-Arts and three years later was appointed head of the newly formed school of graphic art. This led to Vernette discovering a passion for architecture in the classical French style. The pinnacle of his career came in 1977 with his appointment as head of the École des Beaux-Arts in Toulouse. Upon retirement eleven years later Vernette once again took up his brushes to create paintings with strict linear and architectural style.