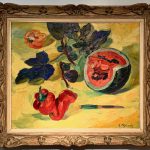 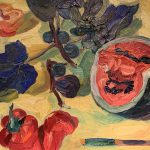 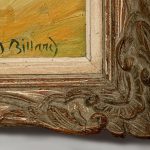 Still-life with watermelon and peppers

A painter whose work is still not widely documented, Jean Billard studied in Paris where in 1925 he gained his academic diploma to teach still-life drawing classes. This was followed in 1932 by winning the competition permitting him to teach art in the French lycées and art colleges. He is believed to have moved soon afterwards south, to Tarbes at the foothills of the Pyrenees. From 1938 onwards he would exhibit at the Salon des Amis des Arts, often gaining favourable critical acclaim.

During the War Billard was part of the artistic group formed by Henri Borde and Pierre Zeller which was to lead to him to produce a large patriotic composition celebrating the Liberation which was exhibited at the Musée Massey. His works are notable for his use of vibrant and contrasting colours, often with his favourite bold and vigorous usage of yellow and orange. His paintings were generally still-lifes with fruits and flowers, but he also would produce landscapes of Provence or the Pyrenees. Despite becoming increasingly reticent to show his work in public, he became a member of the Salon des Artistes Français in Paris, and took over as the head of the art school at Tarbes in 1962 until his retirement in 1977.