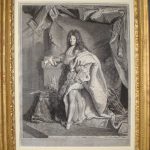 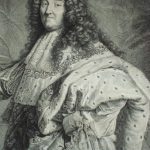 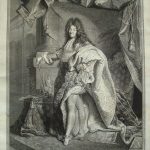 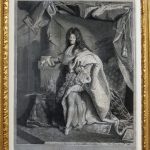 Hyacinthe Rigaud (1659-1743) was the most important portrait painter during the reign of King Louis XIV. His instinct for impressive poses and grand presentations precisely suited the tastes of the royal personages, ambassadors, clerics, courtiers, and financiers who sat for him. This engraving of the King of France is by the printmaker Pierre Drevet (1663-1738) after the 1701 painting by Rigaud.

The oil portrait was commissioned as a gift for Louis XIV’s grandson, Philip V of Spain but was such a success at court that it was never sent to him and a copy was dispatched instead. As a result of its popularity several versions of the portrait were produced in oils. Drevet’s print after the painting was published in 1712. The steady demand for engraved portraits of prominent men in public life during this period grew in importance under royal patronage, and this became the staple output of Pierre Drevet. He excelled at portrait engravings, his skill leading to his appointment in 1696 to the title of Graveur du Roi (Engraver to the King). Portrait engravings such as this one, which has always been regarded by print connoisseurs as a supreme example of the engraver’s art, were sold in print shops but would not have been affordable to many. They would also have been given by the King as gifts to visiting dignitaries and foreign rulers to proclaim his power and majesty.

The print recreates the textures of the sumptuous ermine and velvet enveloping the figure of the King in the original portrait, and demonstrates the remarkable technical skills that were developed among French eighteenth century engravers. The portrait projects an air of grandeur, dignity and magnificence showing an individual not entirely of the real world. Every detail of the work is aimed at producing the image of absolute power. It balances the ideological necessities with some fashionable references in the full wig and the elegant pair of stockinged legs. The king is shown full-length, wearing coronation robes and holding a sceptre with a chain around his neck of the L’Ordre du Saint-Esprit. At his side is a sword. The body of Louis, by now an old man at the age of sixty three, is almost entirely masked by these formal robes which prominently display the royal fleur-de-lis. He stands on a carpeted platform against a backdrop of swirling drapery and monumental architecture. Behind Louis are a throne and a column symbolizing strength, its base decorated with an allegory of Justice and War. To the left of him is a cushion on which rest a crown and ‘main de justice’ (a staff surmounted by a hand). The portrait depicts a ‘king of peace’ founded on majesty, strength and justice.