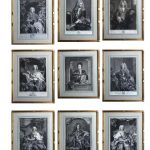 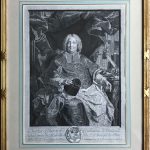 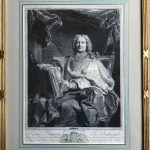 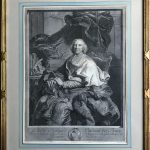 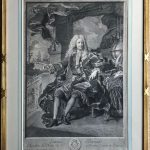 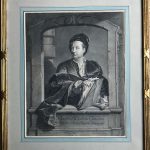 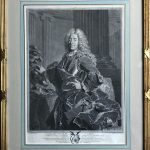 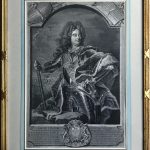 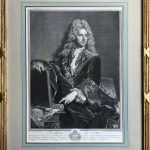 A collection of ten line engravings
from paintings by Hyacinthe Rigaud

Hyacinthe Rigaud was born in Perpignan, south-west France, the son of a tailor. In 1674 he was apprenticed at Montpellier to the little known artists Paul Pezet and Antoine Ranc before moving to Lyon for a further four years study. In 1681 he arrived in Paris to enrol at the École de l’ Académie Royale winning in the following year the first prize.

Acting upon Lebrun’s advice, Rigaud decided against going to study in Rome in favour of trying to establish himself as a portraitist. His early works were of fellow artists and members of the Parisian bourgeoisie, but in 1688 having successfully gained a commission to portray Monsieur, the King’s brother, followed by another of the Duc de Chartres his son, Rigaud’s official career as “the” painter of Louis XIV was launched. From now onwards his Parisian clientele was replaced almost exclusively by the princes of royal blood and the inner court, the great generals (Luxembourg, Villeroy, Vauban), visiting princes (the Crown Prince of Denmark, the Count Palatine Christian of Zweibruken), and visiting diplomats (Lord Portland, his son, and the Comte de Morstin).

Rigaud’s paintings possess an aristocratic elegance and his sitters were usually presented three-quarters or in full length and, if military, often with a landscape behind showing a battle in progress. He managed to combine the brilliance of polished armour and/or the richness of delicate lacework and soft silks with a certain stiff and formal pose. Columns and draperies also were often used in the Baroque convention as backgrounds, whilst his figures held nonchantly, swaggering poses.

Like his fellow portrait painter Nicolas de Largilliere, many of Rigaud’s works belong in spirit and date to the eighteenth century, but both made contributions to the development of French painting well before 1700. Rigaud, especially, helped to combine the severity of the old tradition of the seventh century with a liveliness and freshness of detail which looked forward to the new. According to his account books he was very successful, painting 30-40 portraits per annum.  From 1681-1712 132 of his sitters were reproduced, and by 1743 this figure had grown to 192 different engraved portraits.