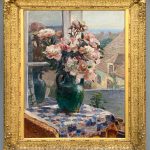 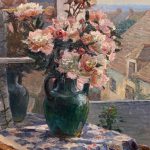 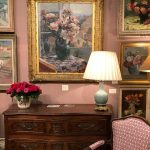 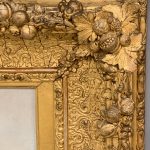 Bouquet of peonies in the window

Bouquet of peonies in the window of the artist’s studio

RAOUL  ADAM (1881 – 1948) was born in La Châtre a small French town in the Département of the Indre in region of Le Centre-Val de Loire. He travelled to Paris to study art in the studios of Fernand Cormon and of Gustave Colin, followed by a course in the decorative arts, before returning to the Creuse area where he became known as a passionate painter of the landscapes and harvest scenes of that region. He exhibited his first views of the Vallée noire of the Creuse at the 1908 Salon des Indépendants in Paris followed by work at the Salon de la Nationale des Beaux Arts from 1912.

He was appointed professor of drawing at the Lycée in Châteauroux in 1920 where his powerful impressionistic style proved highly popular with his students. A fervent admirer of the work of Edouard Monet, his paintings were influenced probably more by the landscapes of his friend Fernand Maillaud also from the Indre region. From 1939 until his death nine years later his home and studio was in the square at the centre of the town of Nohant-Vic.