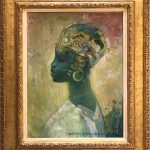 A young girl from Mali

Portrait of a young Mali girl, from the Bamako region,
at a circumcision ceremony

Henri Cayon was born in Paris and was a pupil of Jacques Humbert and R. Collin at L’Ecole des Beaux Arts. He spent most of his career either working abroad in the French colonies or painting portraits and landscapes seen on his travels. In 1911 he was awarded a grant to travel to West Africa where he visited Mauretania, Nigeria, Sudan and Senegal. This trip was followed by a journey overland from Canada down to Mexico, and again to the French Antilles and Marocco.

West Africa held particular appeal to Cayon,and, after another trip to Nigeria in 1918, he became part of the artistic group known as “Les Peintres Africanistes”. He was to return to Senegal in 1924 after his appointment as special correspondent for the illustrated magazine “Annales Coloniales” when he accompanied Haart and Audoin-Dubreuil on the second parliamentary mission to Africa (October 1924 – June 1925). It was during this period that the present painting was completed.