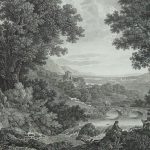 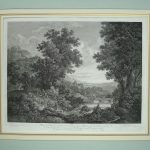 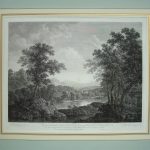 A Pair of Classical Landscapes

Published according to Act of Parliament, 14th June 1762
and 24th January 1763 (respectively) by J. Boydell,
Engraver in Cheapside, London

George Smith (1714 – 1776) together with his brother John Smith (1717 – 1764) were painters from Chichester of rural landscapes, often in the ‘classical’ manner whose works were brought to public prominence through the publication of superb engravings such as these.

Eight years before the establishment of the Royal Academy in 1768, the Society of Artists of Great Britain held what was to be the first of a regular series of exhibitions of contemporary paintings. Catching the eye and imagination of the public, art became a fashionable commodity to be acquired by the sophisticated. Visitors flocked to the exhibitions and whilst they could not all afford to buy paintings, many could afford the luxury of prints.

The founders of the Society of Artists of Great Britain issued proposals for raising by subscriptions a fund to be distributed in premiums for promoting “improvements in the liberal arts and sciences, manufactures etc.” Believing that “ye Art of Drawing is absolutely Necessary in many Employments, Trades and Manufactures, and that the Encouragement thereof may prove of great Utility to the public”, between 1755-63 over £22,200 was raised of which a third was spent on promoting the arts. Premiums were offered for designs, as well as for the development of ideas such as the process of papermaking. The top prizes were 100 guineas for the best history painting and 40 guineas for the best landscape painting.

This was the period that saw dramatic advances in the publication of reproductions of landscape, historical and sporting pictures. A period which was to mirror the development of the English style of landscape painting begun by such artists as George Lambert, George Barrett and Samuel Scott. And just as the successful artists of the 1750s & 60s began to appreciate the importance of engraving as a means of building a reputation, so too did the emerging and enterprising small group of publishers who saw the financial gains to be made by supporting the Society of Arts. Amongst the leading exponent of these was the print seller John Boydell.