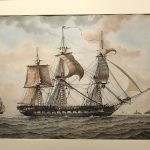 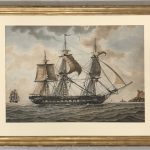 Ange-Joseph Antoine Roux, “Antoine Roux” (1765 – 1835) was born in Marseille and became the best known of a family of maritime artists specialising in the depiction of ship portraiture of vessels frequenting the harbours of Marseille and Toulon. Apprenticed to his father, a hydrographer who published and sold marine charts and navigating instruments, Antoine’s earliest known work was a sketch dated 1787 showing pieces of a man-of-war. His watercolours, renowned for his accuracy in detail – especially in the hulls and rigging – were eagerly sought out by shipowners and their captains as souvenirs. He portrayed images of visiting vessels ships of every nation, either as large single watercolours of naval frigates, or, small sketchbooks with all types of fishing boats and cargo ships. For most of his career Antoine’s format remained consistent in his accuracy in the detail – especially the hulls of the vessels and their rigging. The most obvious and recognisable change to his work from 1805-06 being the softening of his depiction of the waves to softer more natural looking seas.

Antoine Roux succumbed to an outbreak of cholera in 1835. His three sons followed in his artistic footsteps with François, his third, being appointed as an official “Peintre de la Marine” in 1876.