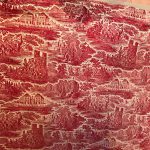 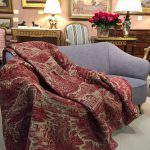 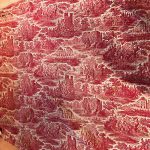 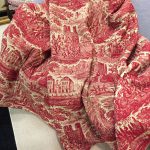 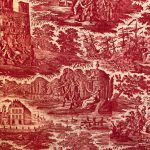 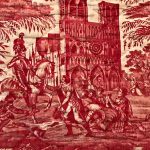 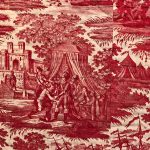 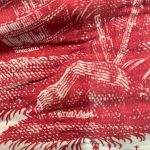 The toile was designed by the engraver Samuel Cholet (1786-1874) who worked in the city of Nantes until 1836. The subject was based upon Voltaire’s epic poem La Henriade the theme of which was the twin evils of religious fanaticism and civil discord, and tells the story of the young Henry of Navarre before his accession to the throne of France.

The subjects shown include:

The siege of Paris in 1589 by Henri III together with Henri of Navarre, soon to be Henri IV.
The entry of the King into Paris in 1594 in front of the cathedral of Notre-Dame.
The equestrian statue at Place Dauphine, Paris.