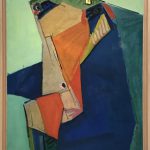 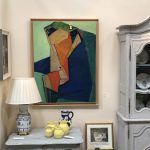 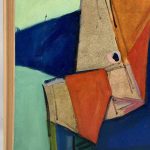 Born in Normandy, into a family with working agricultural background, Alain Boucher was certain of his vocation at an early age. He left school to train as an antique furniture restorer and took up drawing in his spare time, whilst his period of military service in Africa introduced him to a world of bright colour which would later be transferred to his palette. In 1967 he enrolled at the École des Beaux-Arts at Rouen but left in 1971 after a disagreement with his teacher about the methods of painting. This rejection of the academic style has persisted throughout his artistic career, while his work has been consistent in portraying a joyful and personal observation of the environment which surrounds us all. In the 1970s Boucher was visibly influenced by fellow artist Jean Dubuffet in his uses of strong lines, but these lines were adapted by the added use of much more vibrant colour.

The constant theme of his pictures has been one of movement, of dancing figures often turning with rhythms of uncontrolled madness, or revolving machines such as the bicycle. Painted with passion, and with an increasing use of vibrant and moving colour, often containing strong yellows and red pigments, his paintings at the same time often ignore pure form and carefully drawn figures.  The human body tends to have a symbolic presence in his work with figures whose suggested presence is sufficient when compared to colour and shapes around them. Happiness is more important than any depiction of anguish or hardness.

His period in Normandy 1967-1987 was predominately abstract to begin with before becoming increasingly semi-figurative. In 1987 he moved south to Gascony where life in the Gers with its strong contrasting colours greatly influenced his work. Throughout his career Boucher has been influenced by his contemporaries who share his passion for expressive composition and spontaneous movement. His paintings can be seen in several museums both within France and abroad.