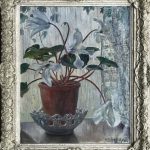 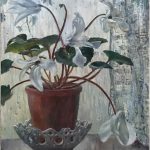 Rain on the window

A painter of figure subjects, flowers paintings and landscapes, Nora Cundell was the granddaughter of the artist Henry Cundell, and her father was the Hon Secretary of the Stock Exchange Art Society. She exhibited at the Royal Academy, the New English Art Club, and the Salon in Paris, whilst also being a founder member in 1930 of the National Society of Painters, Sculptors and Gravers.

She began her artistic studies at the Blackheath Art School and then under the instruction of Walter Sickert at the Westminster Technical Institute. This was followed by part-time studying at the Slade from 1911-14, where she was to return in 1919 post the First World War. Her first solo exhibition was held at the Redfern Gallery in London in 1925.

An independent and adventurous woman, in 1934 Nora travelled to America for the first of what was to be several visits to the deserts of Arizona and the Grand Canyon. There, she became enchanted by the light and colours of the countryside, an emotion which was furthered by her love for the openness of the dramatic landscape with its equally extreme contrasts of weather. In World War Two she enlisted into the civil defence organization and became an ambulance driver at night during the bombing raids upon London. Her long friendship with the writer J.B.Priestly and his family led to him writing the introduction to her memorial exhibition held in 1949 at the Royal Society of British Artists when he commented upon her talent with the phrase “what she saw and delighted in, she set down with unusual freshness, clarity and honesty”.