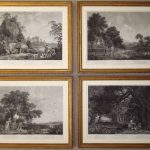 Although Stubbs painted shooting scenes on more than one occasion, these are the only pictures of this subject reproduced as engravings. The identity of the sportsmen remains uncertain but it has been proposed that they might be Stubbs himself with the Duke of Portland since the location of Plate 1 has beenidentified as Creswell Crags on Portland`s Welbeck estate in Derbyshire.

Stubbs received at least 50 guineas for each painting and Woollett the engraver must have been paid £100 for each plate. Thus it would have cost the publisher over £600 to produce the set. Nevertheless it proved to be a good investment, and remains to this day the most desirable set of shooting engravings ever published.