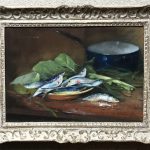 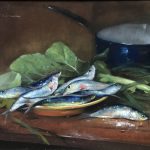 Victor Gensollen, son of Louis Gensollen, was born in Toulon. He studied art at the Ecole des Beaux Arts under Karl Lehmann, and became a watercolourist and pastelist. Upon graduation he returned to Toulon in 1886 and thence travelled to Brazil where he was appointed court painter to the Emperor. In 1890 he returned to France and opened a pastel workshop in Marseilles. He exhibited at the Paris Salon in 1879 and 1880 as well as in Rio de Janeiro. The Musée de Toulon has a work by him entitled “Poissons et Nature Morte”.