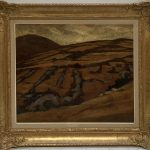 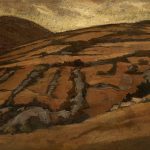 Fascinated by painting and drawing from an early age, Pierre Welcomme became a prisoner of war of the Germans following the invasion of France in 1940. He escaped in the following year and took refuge in Bourg-en-Bresse in the Department of L’Ain by working on the tramways. In the evenings he continued to paint, producing scenes of everyday life within France which were made into postcards. In 1943 he moved to Chevignat with his wife and six children where for the next four years he would paint in oils many landscapes of the area of Revermont, near the Jura Mountains which form part of the border between France and Switzerland.

From 1948 onwards his work would become more abstract, often with the use of gouache, ink and pastels. In 1951 he moved to Brussels to join the family business, but in 1985 he returned to the L’Ain where once again he began to paint and draw, this time experimenting with the use of collages up until the age of 98.